She leaned down and kissed him. Licking and sucking, she pulled his lower lip into her mouth. Mischa groaned. More desire flowed into the mating bond, feeding her own. Gwen sighed, completely relaxed. She continued to kiss Mischa’s mouth and then his jaw and down to his neck. Gwen sucked and licked at the point where his neck met his shoulder. Mischa hummed and tilted his head. 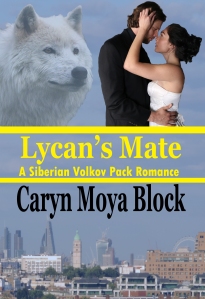 Gwen Quiet Thunder has fought against her Lycan roots her whole life. She didn’t want anything to do with the wolf inside her and couldn’t fathom finding a mate in a Lycan. She thought all Lycan men were like the boy who terrorized her while growing up, mean, cruel, and aggressive. So when the mating bond snaps into place with her future brother-in-law, there’s only one thing to do. Run.

Mischa Sokolov, Siberian Lycan is thrilled to find his future sister-in-law is also his mate. She may be having some problems accepting the inevitable, but he never expected her to run and put an ocean between them. The more he tries to connect with her, the more she pushes him away. But Lycans only get one heartmate and mate for life. He’s going to have to prove to Gwen that she can trust him with her heart or lose the one woman meant to be his.