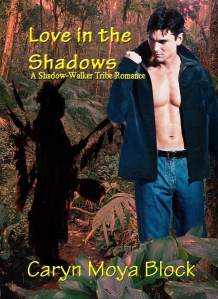 Love in the Shadows

Derek “Red Hawk” Darkwood is known as the playboy of Isanti, Inc., his cover for spying for General Holland. So even though there is a new woman on his arm every night, the one he wants is Katherine Sloane, his brother’s administrative assistant. But five years ago she lost her husband in Afghanistan, and Derek knows she needs time to heal. Just as he is about to make his move and take the woman he wants, Derek kills his ex-girlfriend right in front of Katherine. Can Katherine love him, even though she knows he is a murderer?

Katherine Sloane knows that Derek saved his brother’s life. She also knows that she is destined to be with Derek when the Shadow Dimension marks her as Derek’s mate. So why did he disappear? And now that he’s in trouble can she rescue him?

Available at the following retailers: