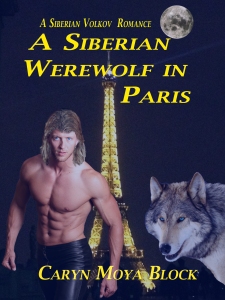 A Siberian Werewolf In Paris by Caryn Moya Block

Valerii Belikov, Siberian lycanthrope, knew that under the baseball cap and grubby jeans “Little Joe MacDonald” was actually Josephine. He didn’t know why she was hiding, but when the mating bond snapped into place after she was injured, he never expected her to run away. Josie is his mate, the one woman meant to be his, and should have known they couldn’t live apart. He could accept her hiding, but there was no way he could give her up.

Josephine Chevalier knew this day would come. Her father’s killers had found her. To keep her pack mates in England safe, she needed to run. It was time to return to Paris where it all started five years ago. Now if only Valerii, the man she wanted above all others, would stay away. Looking down at the golden cord tying their hearts together, she realized he would come. How could she keep him safe?

6 thoughts on “Book Cover Reveal – A Siberian Werewolf in Paris”